The Chicago immigration lawyers of Zneimer & Zneimer are preparing for the H-1B registration.  The H-1B visa is a type of non-immigrant visa that allows U.S. employers to temporarily employ foreign workers in specialty occupations. To qualify for an H-1B visa, the job must meet the following requirements:

END_OF_DOCUMENT_TOKEN_TO_BE_REPLACED

The Chicago Immigration J Waiver Lawyers  remind employers that the fiscal year for the Conrad-30 J waiver application starts on October 1, and that it is never too late to begin the waiver process.

A J-1 Visa Waiver, is a waiver of the two-year home country physical presence requirement for foreign medical graduates (FMGs) who enter the United States on a J-1 visa. This requirement states that FMGs must return to their home country for two years before they can apply for a green card or other non-immigrant visa. The J-1 Visa Waiver allows FMGs to apply for a waiver of this requirement if they are able to secure a job in an area of the United States that has been designated as having a shortage of healthcare professionals, and if they agree to work in that area for three years, at least 40 hours of week, and provide medical clinical services.

The main ways of obtaining a J-1 waiver are:

-Conrad 30 Waiver program, which allows states’ departments of health to sponsor up to 30 foreign medical graduates (FMGs) per fiscal year for waivers of the two-year home residency requirement.

-DHHS Waiver Program, which acts as an interested government agency for primary care physicians who agree to work in medically underserved areas.  This program provides sponsorship only for physicians who will practice in primary care and who has graduated from a primary care residency recently (less than one year ago)

-Other interested government agencies (IGA) programs (Delta Regional Authority, Appalachian Regional Commission , which allow FMGs who agree to work within the area covered by the federal  government agency for a specified period of time to obtain waivers of the two-year home residency requirement. END_OF_DOCUMENT_TOKEN_TO_BE_REPLACED

The immigration law firm Zneimer & Zneimer is informing its clients and the public that the USCIS will open the H-1B registration period for the fiscal year 2024 H-1B cap at noon EST on March 1, 2023, until noon EST on March 17, 2023. During this period, prospective petitioners and representatives will be able to complete and submit their registrations using our online H-1B registration system.  The USCIS will “assign a confirmation number to each registration submitted for the FY 2024 H-1B cap. This number is used solely to track registrations”, states USCIS.  This number cannot be used to track case status.

Prospective H-1B cap-subject petitioners or their representatives are required to use a myUSCIS online account to register each beneficiary electronically for the selection process and pay the associated $10 H-1B registration fee for each registration submitted on behalf of each beneficiary. Prospective petitioners submitting their own registrations (U.S. employers and U.S. agents, collectively known as “registrants”) will use a “registrant” account. Registrants will be able to create new accounts beginning at noon Eastern on Feb. 21.

END_OF_DOCUMENT_TOKEN_TO_BE_REPLACED

Employers who wish to sponsor an employee for an H-1B visa must create an H-1B registrant account on the USCIS website. This account allows employers to submit registrations for their employees during the H-1B registration period.

It is important for employers to stay informed about the H-1B registration process and ensure that they are following all requirements set by the USCIS. Following the USCIS’s announcements helps to ensure that the registration process runs smoothly and reduces the risk of errors or complications that could delay or prevent an employee from obtaining an H-1B visa.  To ensure compliance, employers should:

By following these steps, employers can help ensure that their H-1B registration is complete and accurate, which will increase the chances of their employees being selected for the H-1B program.

The registrant account will require the employer to provide basic information about their company, including Employer Identification Number (EIN), company name, and contact information. Once the account is created, the employer can use it to register their employees for the H-1B visa program. It is important to note that creating an H-1B registrant account does not guarantee that an employee will be selected for the H-1B program. The number of H-1B visas available is limited and selected through a lottery system. 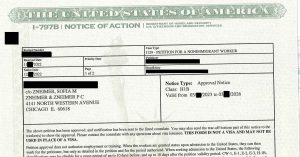 The H-1B visa is a type of non-immigrant visa that allows U.S. employers to employ foreign workers in specialty occupations, such as in the fields of technology, engineering, and science.  The H-1B status permits a foreign worker to live and work in the United States for up to six years, along with the worker’s spouse and children, unmarried and under 21, who receive H-4 status.  Some H-1B workers who are in a process of applying for permanent residence can remain in the U.S. beyond the six-year maximum.  Because immigrant visas are subject to per-country quotas, workers born in oversubscribed countries like India or China may take years, sometimes decades to receive permanent residence.   Our Chicago immigration lawyers like to point out that under current backlogs, a physician born in India will wait over 11 years in line to receive a green card.  In comparison, persons born in countries without backlogs, can immigrate as soon as the paperwork goes through, even if they are not in a professional or a specialty occupation.

If an H-1B worker is laid off, they will generally have to either find a new job and have their H-1B visa transferred to the new employer, or leave the United States.  If the H-1B worker is waiting for a green card and is in a backlogged country, the new employer will have to restart the green card from scratch, but the worker’s place in line will not change because the new petition will receive the earliest filing date from any prior petition.  If the worker is unable to find a new job and their H-1B visa is not transferred to a new employer, they will be out of status and may be subject to deportation.  When a worker falls out of status for more than 180 days, they lose their ability to receive a green card even if they are close to receiving their green card in the line. It’s important for H-1B workers who have been laid off to talk with an immigration attorney to understand their options and ensure that they are in compliance with U.S. immigration laws.

If an H-1B worker is laid off, they may be eligible for a 60-day grace period during which they can remain in the United States and look for a new job. This grace period is known as “60-day portability” and it applies to H-1B workers who have been previously granted H-1B status and who have a new, non-frivolous H-1B petition filed on their behalf within 60 days of their previous H-1B employment ending. This provision END_OF_DOCUMENT_TOKEN_TO_BE_REPLACED

Under the Biden Administration, the USCIS has announced that it intends to fight the backlog of immigration applications through three new action steps: reducing processing backlogs, expanding premium processing, and improving access to Employment Authorization Documents. Our Chicago Immigration Law Office intends to inform all clients on what to expect with their own applications given the recent updates by the USCIS. Read below to learn more about the USCIS’ efforts to reduce backlog and wait times.

END_OF_DOCUMENT_TOKEN_TO_BE_REPLACED

An Employment Authorization Document that has expired on its face is considered unexpired when combined with a Notice of Action (Form I–797C), which demonstrates that the requirements have been met, notwithstanding any notations on such notice indicating an automatic extension of up to 180 days.

END_OF_DOCUMENT_TOKEN_TO_BE_REPLACED

The Immigration and Nationality Act provides that noncitizens with exceptional abilities or who are members of the professions holding an advanced degree, may receive a waiver of the job offer requirement if the USCIS deems such waiver in the “national interest.”  The national interest waiver is available only to noncitizens in the second preference category (EB-2).  This category is backlogged for years for noncitizens born in India or China, and without the ability to apply for adjustment of status for many years, such noncitizens will have to maintain H-1B status.  The requirement to maintain nonimmigrant status puts such noncitizens in a bind and makes it very difficult to develop their endeavor even if such endeavor meets all the requirements for a national waiver.   Noncitizens who apply for National Interest Waiver should be allowed to apply for employment authorization.

To prove eligibility, the petitioner has the burden to show that the person qualifies as either (i) a member of the professions holding an advanced degree or (ii) as a person of exceptional abilities.  Either of these two qualifications is a threshold issue.  Once the person demonstrates that such person meets at least one of the categories, the person also must prove that (iii) the waiver of the job offer requirement, which requires a test of the US market through labor certification requirement, is in the “national interest.” END_OF_DOCUMENT_TOKEN_TO_BE_REPLACED 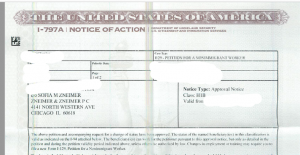 The Chicago H-1B attorneys of Zneimer & Zneimer remind clients and noncitizens that USCIS recently announced the opening of the new H-1B registration period.  The H-1B registrant account function will be available on March 2, 2021, at 12:00 noon EST at myUSCIS. Employers and attorneys who already have MyUSCIS accounts from last year do not need to create new accounts for this year.

To login or to createan account, go to https://my.uscis.gov/, and follow the instructions.  Before starting the process, it is a good idea to watch USCIS’s instructions and check periodically USCIS’s H-1B registration page.  The option to register as H-1B registrant will not become available until March 2, 2021, at 12:00 noon EST.

Only selected registrants will be able to file H-1B cap-subject petitions, and only on behalf of beneficiaries selected through the H-1B END_OF_DOCUMENT_TOKEN_TO_BE_REPLACED

The Chicago immigration attorneys are following developments in immigration law.  Today, the USCIS announced that applicants that file their naturalization applications on or after December 1, 2020, will have to pass the updated citizenship test.  The new citizenship test will include 128 questions from the prior 100, and the officer will ask 20 questions, an increase from the previously required 10 question.  The USCIS will require a pass rate of 60% of the citizenship test, which means that an applicant must answer at least 12 out of the 20 questions.   The officer will not stop once the applicant answers 12 questions correctly but will ask all 20 “to gather data on test items to aid in future updates to the civics test.”  The officer will read of questions that a computer will randomly select.

Remember that “file” in immigration parlance means that the USCIS must have received the application no later than November 30, 2020, for the old test to apply.

According to the USCIS, “the revised test will improve USCIS’ ability to assess applicants’ knowledge and understanding of U.S. history and civics as required by the INA.”  The new test is now available on the USCIS’s website.

END_OF_DOCUMENT_TOKEN_TO_BE_REPLACED

Search
Our Other Blog
RECENT ENTRIES